Be part of something exciting, shares available to purchase

A very talented, young, charismatic gentleman contacted me over a year ago looking for assistance with his focus on the golf course, developing his mind set and developing his resilience.

Listening to Wallace unfold his background story about himself, his golf and his dreams, it became clear that even after a shoulder injury years ago, which thankfully he fully recovered from, and personal bereavement not that long ago, Wallace has not lost his passion or ambition to strive towards his dream.

Since September 2016, Wallace went to see a new coach, Andrew Nicholson, based at Wyndyard golf club near Newcastle, and his game has really moved on to another level.  Wallace explained to me recently that it is the best he has ever hit the golf ball and he is feeling excited and ready for the challenge ahead in 2017.

Through working with myself using various techniques using an integrated therapy structure for visualisation, focus, self-esteem/motivation etc. and working with a Sports psychologist for on course techniques Wallace has said;

“I have mentally turned a corner with my golf, I truly believe that 2017

is going to be a massive year for me.”

His statistics don’t lie either, he has shown a tangible improvement from the first half of the year to the second half of this year, even more so since September.

Wallace now feels he has the right team around him to help him compete with an edge and strength which will make him a noteworthy rival against his competitors in 2017.    The only piece of the puzzle which is now left for him is having the funding in place to allow him to go and play golf worry free and he is offering an exciting venture for you to be part of his success story.

Wallace is offering shares in himself at a modest £100 per share, aiming to sell 250 shares which will pay out dividends at the end of the year to all shareholders.  There are opportunities to have your company logo, branding etc. on his attire so you will get great exposure to target markets.

Certainly since Wallace first came into my session room, in contrast to now, I have seen a massive change in him.  Rarely do I came across individuals with such drive, focus and unrelenting want for self actualisation, but yet still remain modest, polite and full of character.  It’s a real pleasure working with Wallace and I’m sure that if you decided to be part of this story you would share my enthusiasm for this talented individual.

You can read more about Wallace at www.wallacebooth.com and contact him through his webpage if you want to know more about shares, sponsorship or his success story. 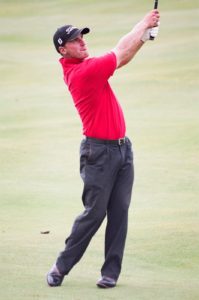